Many people say that Finland and Japan share many similar things such as culture, people, and the social norms. One example should be a traditional Finnish sauna and Japanese bath house (or public hot spring).

After I moved to Finland, sauna has been essential part of my life. I gradually started realising that we can find interesting similarities and differences between Finnish sauna and Japanese bath house, as I got to know more about Finnish sauna.

Here I’d like to show some similar and different points between Finnish sauna and Japanese bath house.

Finnish sauna and Japanese bath house are not something special for people. In Finland, people take sauna at home, cottages, or go to public ones.

Even though the number of public saunas have been decreasing, you can still find traditional public saunas and also modern ones equipped with swimming pools and bars/cafes/restaurants.

In Japan, people mostly take a bath at home since Japanese house is usually equipped with a bathtub. However, it’s also really popular to go to a public bath house or a public hot spring after work or during the weekend.

Like in Finland, although the number of public bath house have been decreasing, modern bath houses equipped with “sauna”(mostly not Finnish style), cold water bath, jacuzzis, massage places, and so on.

In Japanese language, we have this word called “Hadaka no tsukiai”, which means “naked socialising” or “naked association”.

This indicates that bathing is a good way to communicate with people and it makes it easier for you to talk things that you don’t usually feel like talking.

In Finland, sauna plays a big role in people’s interaction. As this is a very typical topic to talk among foreigners who have lived in Finland, sauna turns shy Finns into friendly people.

We can say that sauna removes communication barriers. It’s not surprising that some politicians or business people go to sauna with their business partners, clients, or guests.

In Finland, beer and sider are popular drink during sauna, while the Japanese people like to drink milk, cold cafe au lait, or cold fruits au lait after they take a bath at public bath house, which is a very traditionally way to cool down your body.

For those who don’t have a high tolerance for alcohol, I wouldn’t recommend to drink beer or sider while taking sauna where your blood circulation gets more active.

Otherwise you might pass out, but it actually feels awesome to drink just one cold drink in the hot, super humid sauna.

You can find basic manners of Finnish sauna from many websites as Finland is said to be a country where sauna was born.

The structure is quite simple with the wooden building and a sauna stove as you probably know, and you throw the water in the stove to warm up the room with “Löyly”, which means sauna steam.

In Japanese bath house you can also find saunas but in many cases, they are not authentic Finnish sauna. You are not supposed to throw the water, and the funny part is that many of the saunas are equipped with TV. 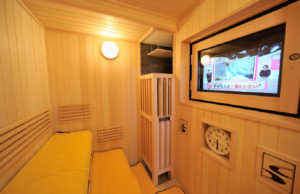 This shows that the basic idea of taking sauna is quite different between Finnish and Japanese people.

Even though sauna offers the environment where you could take your phones out, Japanese people still try to turn the relaxing environment into the digital world.