It’s been already over three and a half years since I moved to Finland from Japan. It would be nice to share my first impressions towards Finnish people, culture, and cities during my first three days in Finland.

One morning at the end of the summer of 2016, I was at the small airport lounge of Osaka Kansai International airport waiting for my Finnair flight AY078 to Helsinki.  I was reading a letter and messages my family and friends sent me and apparently, I was the only one shedding a few tears there.

Luckily, my seat was upgraded to business class due to over booking as if Finnair knew that I was about to leave my home country for my new challenge. 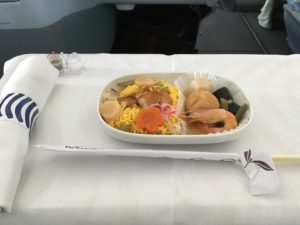 The seat was comfortable with cool amenities of Finnish brands and the flight itself was smooth enough to make me think about what the next chapter of my life brings me.

After 9 hours of flight, I arrived in Helsinki. It was chilly, not like super hot and humid temperature in Osaka, but weather was perfect with no clouds.

I checked in a hotel and decided to walk around the city since it was still 4 pm in Helsinki time and a bit too early to go sleep. I dropped by R-Kioski to buy a SIM card and then headed to the city centre. While the short journey in the beautiful capital city, also known as “Daughter of the Baltic”, I already liked the city for several reasons. 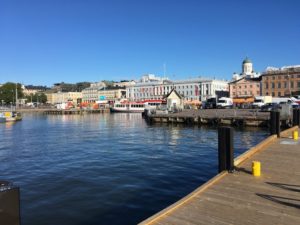 First, I was impressed with the clean air. Also, people I talked during the short time period, including the sales staff at a shop, Finnair cabin crew and a receptionist at a hotel, were polite and helpful. In addition, cars stopping for the pedestrians gave me a good impression too.

My first day in Finland was brilliant. While I was focusing on those positive sides, I didn’t know that I would face some unique Finnish food starting from the 2nd day…

I woke up early morning since I had a jet lag. After breakfast I decided to hang around the city and it was actually nice to check some tourist spots under the beautiful sunshine. 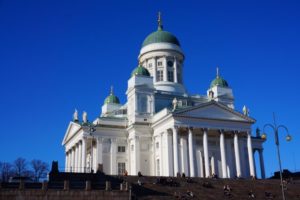 I decided to head for the market square since it’s always a good way to check local markets to get a variety of local information firsthand (which you can’t get from a guidebook or youtube), such as local specialties, price ranges, people’s behaviour, popular payment system, and so on.

It felt like that most of the shops there were selling either berries, vegetable or fish-related products and there are not that many varieties of shops. The market itself was lively and I was passing by people eating fried vendace (‘muikku’ in Finnish) and locals choosing fresh berries. 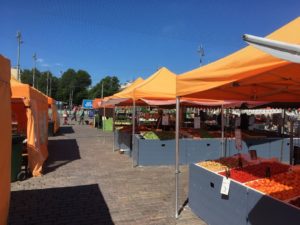 Unlike some other countries, the vendors weren’t aggressive at all. Some of them kindly let me taste blueberries but never tried to sell them to me, which I liked. I already observed one typical ‘Finnish-ness’ there.

However, I was lucky enough to find one unique shop and a product. I found a small stand selling something that didn’t look familiar to me and the vender talked to me with smile and energy.

Vendor : “Hey would you like to try a reindeer meatball?”

I knew that Finns eat reindeer meat so expected someday I would taste it, but I didn’t expect that the chance came that early.

How did I like it…?  It was so gamy! I had to take my water bottle out of my backpack to remove the taste remaining in my mouth. I thought reindeer meatball was a common dish in Finnish households and I was a bit disappointed with it.

However, later through my life in Finland, I found out that reindeer meat itself was tasty (especially stake & saute) and the reindeer meat wasn’t something Finns eat on a daily basis. When it comes to reindeer meatball, I haven’t even seen it in restaurants or supermarkets after that so maybe I should take that experience as a welcoming gift to me from Finland.

One point I was impressed was that most of the shops take credit card payment even though they are basic stands located outside. Another thing I realised in the market was that seagulls flying or huddling actively there were big & fat. It can be easily guessed where they get food from.

I felt sleepy so decided to take a nap. While I was walking in the city centre to my hotel, I noticed that quite many people actually smoke and I found discarded cigarette butts on the street.

After I had an enough rest, I met up a Japanese man in the hotel lobby. I got his contact through a small coincidence. Just a couple weeks before I left Japan, my mother was playing tennis with some friends and told them that I would be moving to Finland for master’s degree. Then she found out that one of the friends’ cousin’s son is now living in the capital area.

We took a bus from the centre to Espoo and I was positively surprised that you get to access nature easily just by 10-15 min drive from the central part of Helsinki. Also, it was around 4:30 PM and the road was a bit congested since people start going back home from work. It should be a normal daily scene for local people but for me it was unbelievable to see people finishing work before 17.

He kindly invited me to his home in Espoo for dinner and his Finnish and two kids welcomed me there. It was my first time to visit a family who speaks two languages in a household. I now know that bilingual families are not very rare in Finland but it isn’t that common in Japan, so I was amazed to see small kids speaking Japanese to dad and Finnish to mom. 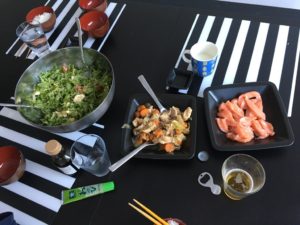 Over the tasty meals, we had good conversations and I found out that he actually graduated from University of Jyväskylä, which I was about to study in. I got a lot of tips including school life, working culture in Finland, Finnish lifestyle and a basic sense of value of Finns. I still remember one good advice he gave me clearly.

“When you are involved with people or socialise in communities here in Finland, you should try to remove barriers of gender, ages and social status.”

After dinner he drove me to the central station and I went to bed early since I had to take an early flight to Jyväskylä next morning.

I was waiting for my flight from Helsinki to Jyväskylä at the airport. I wasn’t sure if I was as at a right gate since there seemed to be only a couple of other people besides me there.

I boarded a small airplane and surprisingly there were only 4 passengers including me. Later I knew that people usually take a bus or train between Helsinki and Jyväskylä but I was with two heavy luggages so in a way it was a good choice.

During the 30 min flight, while enjoying the blueberry juice which I had for the first time in life, I revelling in the bird’s-eye view of Finnish nature. Especially I was overwhelmed by the number of lakes, and the beautiful scenery was persuasive enough for me to believe that Finland has around 188, 000 lakes. 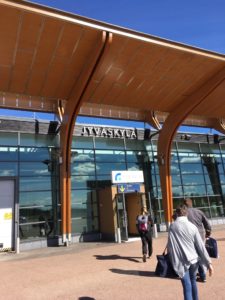 Right after I arrived in the city centre of Jyväskylä, I met up my international tutor. She came on time and seemed like a kind, chill person. We took a bus to my student apartment and I met my flatmates there.

One guy was an international student from Bulgaria and he was friendly and kind and even told me that he could help me for anything since he had been in Finland already for a while. On the other hand, the other flatmate was a Finnish guy majoring in IT and he was super shy and quiet. We introduced each other but his voice was so small so I couldn’t hear his name. (Actually I never memorised his name later…)

After the fun accident, other international students from China and Ukraine, who were in the same tutor’s group, joined us and we went to one of the student restaurants for lunch.

While lining up at the buffet, the food there already looked kind of exotic to me. Plus, my first question was “How come there are so much potatos here!?”

Honestly I didn’t really like food there. It was more like the basic taste was very different from what I was used to. (FYI, I now like Finnish food 🙂 ) A Chinese student sitting next to me said the exactly same thing so maybe it might be hard  for Asian students to get used to food served at student restaurants in the beginning.

After we all finished eating, our international tutor took a small box full of black candies out of her backpack. She gave a piece of candy to each of us saying ‘dessert time!’ with a challenging smile.

I immediately recognised it since I had read about the black candy, SALMIAKKI,  in a guidebook and somewhere online before and it was usually described like “Worst candy in the world” or “Unique souvenir from Finland”.

Of course I tried it out of curiosity but I wasn’t able to finish it (No surprise!). That was the moment when my ongoing challenge started and salmiakki has been bringing me various opportunities so far.

Then, our tutor us to several second-hand shops since we wanted to buy some furniture for cheaper price. I was surprised that there were many second-hand shops in the small city where you can find a variety of used items, from beds and sofas to cooking tools. That somewhat shows how common to reuse items among people in Finland. Luckily I got a bed and a chair there.

After shopping, our tutor sent each of us to our student apartment. Because of furniture we bought, we had to be a bit creative to fit in a car. 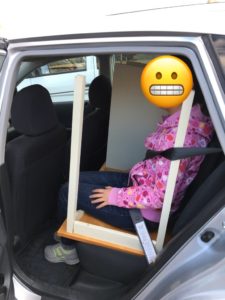 I got back to my apartment, did some errands and ended my first day in Jyväskylä. I never knew how my student life will go from the next day in the lovely, compact student city in central Finland, but I was pretty sure that everything will work out. (And it did!).

One point that brought comfort and relief to me was that Finnish and Japanese people seemed to have similarity in various aspects of social behaviour, such as punctuality, respect for personal space, at-Home etiquette (e.g. taking off shoes at the entrance), and so on.

With the mixed feeling of big excitements and some concerns, I fell asleep early so that I could continue to the 4th day in Finland with the best condition.